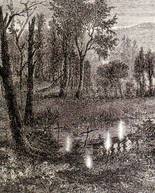 The stories that are presented do not have specific date or order of any kind. All the accounts have took place during 18th to 19th century.

- A strange figure that appeared on the stove of an inn on night near the town of ridgeway. (w-files.com, 2011)

- Two Pokerville citizens were walking one evening along the road carrying a plank or a rail on their shoulders. As they were passing a brush thicket the brush parted and an apparition in white leaped onto the plank between them. The men, badly scared, began to run. They held onto the plank and the Ghost, standing in the middle of it, lashed them painfully with a switch as they ran. Finally they fell down exhausted, and when they could bear to look the white thing had vanished. (w-files.com, 2011)

- In the town of Pokerville, there is an account of a stranger that joined a poker game and was playing tricks on the other player through out the course of the game and then vanished into the shadows of the room. (w-files.com, 2011)

- John Riley, a teamster, who was hauling a wagon load of pig-lead, stopped at a saloon in Jennytown for a couple of drinks of "bug juice." He knew that he was near the stamping ground of the Ridgeway Ghost and needed something stronger than water to transfuse his courage. When he returned to his wagon after dark he noticed that his oxen had been hitched to the rear. As John Riley looked down the road he saw the Ghost walking away with his lantern and whip. John put up for the night at Jennytown. (w-files.com, 2011)

- Welshmen and Cornishmen had the most adventures with him. One day at dusk a Welshman was trudging along the road just west of Ridgeway. This was in the 1840's. As he walked along the dusty road he noticed that he was being followed by someone. Taking a good look at this hazy person, the Welshman decided that it was the Ridgeway Ghost, and he quickened his pace. The apparition did likewise, always keeping the same distance behind. The Welshman, determined to lose this evil phantom, broke into a dog-trot. The Ghost did the same. The Welshman now became downright terrified and began to run, faster and faster. (And a frightened Welshman can travel mighty fast!) He ran so hard that he was soon out of breath. Finding a log by the side of the road, he sat down to rest on its far end. The Ghost, running close behind him, now came up and sat at the other end of the log. It was one of the few times when the Ghost uttered a word. He said, "That was some good running you were doin'." (w-files.com, 2011)

- A Welsh farmer living near Ridgeway went to his pump one evening to get two pails of water. When he reached his house with the full buckets he looked back at the pump and in astonishment saw that the pump handle was still going up and down and water was still pouring our of the spout. He had heard stories about the Ghost, and now he knew that the rascal was haunting the pump. He ran into the cabin and blocked up the kitchen door. (w-files.com, 2011)

- A Welsh settler who was riding over the hills on horseback thought he saw something move in a deserted cabin he was passing. Dismounting from his horse, he went to the cabin and looked in. There he saw the Ghost, who was visiting the cabin on some nefarious business of his own. The rider struck at the Ghost with his whip and the Ghost disappeared. The man noticed the next day that in his own fright his fingers had sunk into the stock of the whip with which he had struck at the Ghost. The impressions made by his fingers were plainly seen. This man's name was Lewis. (w-files.com, 2011)

- The Ghost nervousness infected others than the railroad gang. A young farmer went out to hunt small game for his home larder. He was returning in the early, misty evening when he suddenly saw a mysterious white object directly in his path. The thing appeared to be very threatening, and the farmer knew that he was about to have an encounter with the famous Ridgeway Ghost. Quickly he raised his shotgun and fired. The white object remained just where it was. He managed to load and fire again, but with no effect. Then, tossing away gun and gamebag, he took to his heels. (w.files.com, 2011)