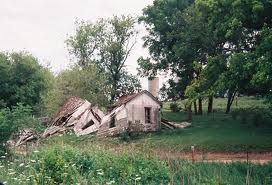 R oute 151 winds through Wisconsin's best-known
ghost  country. The stretch from Dodgeville to Blue Mounds became so famous for
hauntings that by 1943 folklorists had collected several hundred tales of the
Ridgeway Ghost. Though most were undocumented, one incident appeared in The New
York Times on Dec. 7, 1902. (Wisconsinosity.com, 2006)
The paper reported that John Lewis, "a prosperous
farmer living in the vicinity of Ridgeway, a man of sober life, (and) undaunted
courage," cut through the fields one night after helping a neighbor with some
butchering. Climbing a stone wall, "his attention was arrested by the sight of
a  figure that seemed to have gathered itself together out of the just now
tenantless air and stood confronting him in a menacing attitude." (Wisconsinosity.com, 2006)


Lewis fled, but the ghost stepped across his path
and  raised its arm. "Next morning a neighbor found Lewis lying inside the wall
in a  semi- conscious condition. . . . He said he had been hurled in the air as
if in  the vortex of a cyclone, pounded, crushed into insensibility. He died a
few  hours after he was carried home, asserting with his dying breath that he
had  come to his end by a supernatural agency." (Wisconsinosity.com, 2006)

Many local residents gave accounts like this
between  1840 and 1900. Although reports of the Ridgeway Ghost declined over the
decades,  claims of mysterious manifestations occurring as late as 1993 have
surfaced on  the Internet. The supposedly haunted house collapsed in ruins a few
years ago,  but legends about its ghostly occupant live on.
(Wisconsinosity.com, 2006)
Powered by